Julebukking is a Scandinavian tradition that you too may have also learned about through a Facebook post. It sounds similar to Halloween in North America--celebrants go door to door wearing costumes and masks. Sometimes the visitors sing and receive candy.

According to Wikipedia, the tradition may have originated in Norway during pre-Christian pagan times.

noun
1. speech too pompous for an occasion; pretentious words.
2. Obsolete. cotton or other material used to stuff garments; padding.

EXAMPLE SENTENCES FROM THE WEB FOR BOMBAST
On the one hand, this is as much production value as one would expect for elite athletes, and just as much bombast as directors Ian Bonhôte and Peter Ettedgui afforded their last documentary subject, fashion designer Alexander McQueen.
3 NEW DOCUMENTARIES TO STREAM THIS FALL|ERIN BERGER|SEPTEMBER 21, 2020|OUTSIDE ONLINE

In the midst of all her bombast, I suddenly saw her as the sad, lonely old woman she was.
OSWALD’S MOTHER WAS A THOROUGHLY DISAGREEABLE PIECE OF WORK|STEVE NORTH|NOVEMBER 17, 2013|DAILY BEAST

Bombast was trumping originality and critics were at the end of their ropes with it.
A ‘WICKED’ DECADE: HOW A CRITICALLY TRASHED MUSICAL BECAME A LONG-RUNNING SMASH|KEVIN FALLON|OCTOBER 30, 2013|DAILY BEAST

A few weeks later the target of his bombast had been expanded to all mental health patients.
AMNESTY INTERNATIONAL U.K. BOARD CHAIRMAN RESIGNS OVER CRUDE JOKES|NICO HINES|AUGUST 14, 2013|DAILY BEAST

verb:
1 walk or travel through or round a place or area, especially for pleasure and in a leisurely way.
1a (historic British) walk round (a parish, forest, etc.) in order to officially assert and record its boundaries.

Built over two years by engineer Thomas Cargill, it reached over 1,000 feet into the sea and featured an impressive castellated entrance. Visitors paid a penny a head to perambulate over the beach, the waves and way out across the sea. (Dave Lee, Why unique Withernsea stands apart from its Yorkshire coast counterparts, Yorkshire Post, August 2020)

"We can sometimes spot them at night when we perambulate the forest," the official added. (Keerthi P, Rare sighting of slender lorises in Tirumala amid COVID-19 lockdown, The News Minute, May 2020)

It happened more than once that they would thus perambulate three or four times the distance, each seeing the other on board his ship out of pure and disinterested affection. (Joseph Conrad, The Mirror of the Sea)

If the gentleman wishes to perambulate America, it is probable he will get there with a little patience. (H+James Fenimore Cooper, Homeward Bound)

Late Middle English from Latin perambulat- 'walked about', from the verb perambulare, from per- 'all over' + ambulare 'to walk'. (Oxford English Dictionary)

noun, plural wreaths [reethz, reeths]
1. a circular band of flowers, foliage, or any ornamental work, for adorning the head or for any decorative purpose; a garland or chaplet.
2. any ringlike, curving, or curling mass or formation: a wreath of clouds.
3. a. a curved section of a handrail.
b. Also called wreath·piece. a curved section of a string.

verb (used with or without object)
4. to wreathe.

OTHER WORDS FROM WREATH
wreathlike, adjective

WORDS THAT MAY BE CONFUSED WITH WREATH
wraith, wreathe, writhe

EXAMPLE SENTENCES FROM THE WEB FOR WREATH
Plus “The stump of a pipe he held tight in his teeth/And the smoke it encircled his head like a wreath”?
KEEP CHRISTMAS COMMERCIALIZED!|P. J. O’ROURKE|DECEMBER 6, 2014|DAILY BEAST

He will then visit the Western Wall and lay a wreath at the Holocaust memorial at Mount Herzl.
THE POPE’S RISKY TRIP TO THE HOLY LAND|BARBIE LATZA NADEAU|MAY 23, 2014|DAILY BEAST

A wreath of green leaves is placed on her head where a red band stands out against her white-blond shaved head.
HALLUCINATING AWAY A HEROIN ADDICTION|ABBY HAGLAGE|MAY 4, 2014|DAILY BEAST

For Coming Soon, Gordon's initial plan was to make and then display her wreath paintings in a low-budget California tract house.
KIM GORDON: GOING SOLO AFTER SONIC YOUTH, AND WHY SHE IDENTIFIES WITH ‘GIRLS’|ANDREW ROMANO|APRIL 10, 2014|DAILY BEAST

She's great to have a chinwag with too on the route home when you feel relieved that your child/children made it to school with everything they need and their bottle didn't leak in their book bag. (Beth Duffell, Adored, neglected, and restored: A 1968 Nat Geo feature explored Notre Dame, SurreyLive, February 2020)

Usually it’s seen as a pact between audience and performers that you have to put up with what is on stage in front of you, and can't have a chinwag with the producers afterwards, asking them to carry out alterations. (David Lister, Since when is the audience allowed to change the script?, Independent, February 2015)

As we chinwagged about the podcast and all things horror, it became clear that this wasn’t the only thing that was spot on about this lovely guy. So, too, was his killer sense of humour. (Steven Allison, Interview: Mitch Bain from 'Strong Language and Violent Scenes', The Nerd Daily, Nov 2005)

After our meetings were officially brought to an end in 1959, I continued to see Alec as usual for the chinwag we enjoyed so much. (Paul Bailey, The Prince's Boy)

Though still early there were groups of loiterers and habitués congregating at the usual and customary storefront vantage points to chinwag, speculate, and take in the consequential and insignificant comings and goings. (Ken R Abell, Shadows of Revenge)

To have a chinwag in current usage is to have a gossip or a wide-ranging conversation on some mutually interesting subject. It goes back a long way. As an example of the byways that searches can take one down, the earliest example I've found is from the North Lincoln Sphinx, a regimental journal prepared by and for the officers and men of the second battalion of the North Lincolnshire Regiment of Foot. The issue for 28 February 1861, prepared while the battalion was based in Grahamstown, South Africa, included some jokey revised 'rules' of whist, whose first item was "Chinwag is considered rather as an addition to the game, than otherwise, and is allowed." A footnote said that it was an "American slang term for excessive talking."

I wonder if the footnoter is right. All the early examples are British, including this one from Punch in 1879: "I'd just like to have a bit of chin-wag with you on the quiet." The English slang recorder, John Camden Hotten, included it in the second edition of his Dictionary of Modern Slang, Cant and Vulgar Words in 1873, but intriguingly defined it as 'officious impertinence'. It was more often used in the sense of those whist rules to mean inconsequential talk or idle chatter or to suggest unkindly that some person couldn't stop talking. Wagging one's chin, indeed. (World Wide Words)

First observed in 1593, peregrination is an astute way to say walking, meandering and walking. 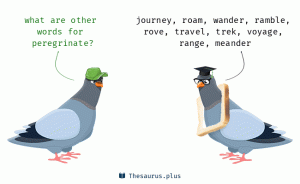 noun:
1 (archaic) a mischievous or wayward person, especially a young person or child; a rascal
2 something capable of causing oblivion of grief or suffering; anything inducing a pleasurable sensation of forgetfulness, especially of sorrow or trouble.

Hayward’s fruity baritone provides a firm foundation for a wide-ranging portrayal of the title role that encompasses the archetypal breadth of the elderly scapegrace while humanising his fallibility. (David Kittredge, A Falstaff for the annals at the Grange Festival, Financial Times, June 2019)

So Aladdin is a scapegrace, an idler, but he's frank and courageous, and the Moor who pretends to be his uncle is a deceiver all through. (Philip Pullman, Aye, there's the rub, The Guardian, Nov 2005)

Bluck, the neglected young pupil of three-and-twenty from the agricultural district, and that idle young scapegrace of a Master Todd before mentioned, received little eighteen-penny books, with "Athene" engraved on them, and a pompous Latin inscription from the professor to his young friends. (William Makepeace Thackeray, Vanity Fair )

Yes they can, aunt, if she married a man whom she knew to be a scapegrace because he was very rich and an earl. (Anthony Trollope, Can You Forgive Her?)

At first glance, you might think 'scapegrace' has something in common with 'scapegoat,' our word for a person who takes the blame for someone else’s mistake or calamity. Indeed, the words do share a common source - the verb 'scape,' a variant of 'escape' that was once far more common than it is today. 'Scapegrace,' which first appeared in English in the mid-18th century (over 200 years after 'scapegoat'), arrived at its meaning through its literal interpretation as 'one who has escaped the grace of God.' (Two now-obsolete words based on a similar notion are scape-thrift, meaning 'spendthrift,' and 'want-grace,' a synonym of 'scapegrace.') In ornithological circles, 'scapegrace' can also refer to a loon with a red throat, but this sense is rare. (Merriam-Webster)

Now and then you come across a new word out of the blue! While ordering groceries online, I noticed that rugelach, pronounced rug-a-lah, for sale in the pastry section and ordered some out of curiosity. Turns out it was a delicious choice.

According to Wikipedia, the treat originated among Polish Jews. There are many recipes online if you care to try your hand at it. The dough is made from sour cream or cream cheese and common fillings include raisins, nuts, fruit preserves, chocolate and walnuts.

noun
1. a glittering metallic substance, as copper or brass, in thin sheets, used in pieces, strips, threads, etc., to produce a sparkling effect cheaply.
2. a metallic yarn, usually wrapped around a core yarn of silk, rayon, or cotton, for weaving brocade or lamé.
3. anything showy or attractive with little or no real worth; showy pretense: The actress was tired of the fantasy and tinsel of her life.
4. Obsolete. a fabric, formerly in use, of silk or wool interwoven with threads of gold, silver, or, later, copper.

Has this forced him to recalibrate his pettifogging fussiness? Far from it — he now has more to get gloriously grumpy about in his latest show, entitled Old Man. (Bruce Dessau, Jon Richardson, review: Pedant’s well worth the fuss, Evening Standard, November 2017)

Oh, how I long for the days of political debate when pettifogging blatherskites held no truck with mollycoddling. (David Kittredge, Renaissance Redneck: A blatherskite’s delight, Eagle Times, August 2020)

A pair of pettifogging lawyers had been kicking up a legal dust, and one of them, Bordens lawyer, was still at it. (John H Whitson, Justin Wingate, Ranchman)

However, I was obliged to begin a prosecution in form, and accordingly my governess found me out a very creditable sort of a man to manage it, being an attorney of very good business, and of a good reputation, and she was certainly in the right of this; for had she employed a pettifogging hedge solicitor, or a man not known, and not in good reputation, I should have brought it to but little. (Daniel Defoe, The Fortunes & Misfortunes of the Famous Moll Flanders)

In the later middle ages, there was a class of lawyers who earned their livings making a great deal of fuss over minor legal cases. About 1560 they came to be called pettifoggers. They often had limited concern for scruples or conscience and the term was deeply contemptuous.

Petty, then as now, meant something minor or trivial (from the French petit, small), so that part is obvious enough, but where does fogger come from?

Theories abound. One of the better known, and quoted as fact in a few dictionaries, is that it originated in a German family named Fugger, who were successful merchants and financiers of the fifteenth and sixteenth centuries, based in Augsburg. German, together with Dutch and other Germanic languages, also had variations on fugger as a word for people who were wealthy or grasping about money, or whose business methods were disreputable. Hence in English fogger, dating from the later sixteenth century but long obsolete, was a word for an underhand dealer. The German word might be the source.

The lawyers called pettifoggers spent their time arguing about matters of small importance. The term became popular, and spawned derivatives like pettifogging. These survived the original term, which is now considered archaic, but we retain in the latter word the idea of somebody who places too much emphasis on trifles or who quibbles about minor matters. (World Wide Words)