noun:
1  a: an ornamental stand for plants or flowers
b: a large usually ceramic flowerpot holder
2  a garnish for meat consisting of several cooked vegetables cut into pieces

Then there's the Japanese gilt and patinated bronze jardinière by Miyao. 'One great thing about being married to an ex-florist is that our house is always full of flowers,' he says. 'This jardinière would be the most perfect vessel for orchids.' (Lucy Scovell, The tastemaker: Peter Copping, Christie's, April 2021)

A rare Ewenny jardinière with trailing flowers and a sculptural pair of dragons to the rim sold at Rogers Jones in Cardiff. (Roland Arkell, Hammer highlights: five lots that caught bidders’ eyes including a rare example of automobilia, Antiques Trade Gazette, October 2018) 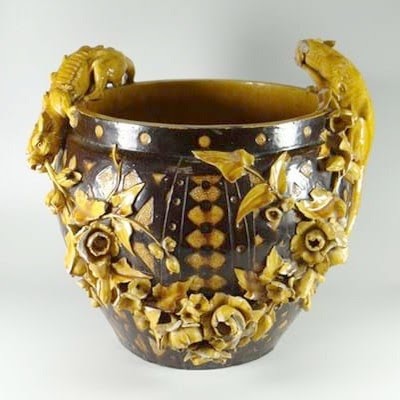 The markets in France are overflowing with beautiful young veggies. And what better idea for a chef that to combine them in the bright and lovely dish known as a jardinière - literally, a garden box - of vegetables. (Sam Adeoye, Jardinière de légumes printaniers, The Everyday French Chef, April 2014)

The seeds of jardiniere were planted back in ancient Germanic languages whose words for 'garden' eventually grew into Old French jardin, a term that produced several offshoots, including the French word jardinier, meaning 'gardener', and its feminine form jardinière (literally, 'female gardener'). It was that jardinière that blossomed into the French (and later the English) word for a large ornamental flowerpot or plant stand. By the way, the Germanic forerunners of the French terms are also distantly linked to another word important to English-speakers: garden. (Merriam-Webster)