adjective:
resembling the blue of the sky; a shade of blue ranging between azure and a darker sky blue 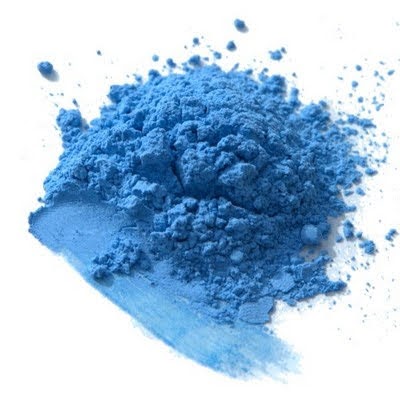 Ten thousand balloons drifted into the cerulean sky as Yoshinori Sakai jogged up the 163 steps leading into the stands of Japan National Stadium. (Rob Gilhooly, When Tokyo unveiled its modernity to the world at the 1964 Olympics, The Japan Times, July 2021)

More than 1.7 million people follow this feline on Instagram to stare into his slightly askew, cerulean eyes and see what costume his owners will dress him up in next. (Paula Froelich, 12 cool Instagram cats to follow on Caturday, New York Post, December 2019)

Far below, the sea is swirling with shades of blue. It’s as if someone has rinsed a paintbrush in it - kingfisher, periwinkle, cerulean and duck egg. (Angelina Villa-Clarke, Find your mojo in Mauritius, The Jewish Chronicle, July 2021)

I have discerned a matchless and indescribable light blue, such as watered or changeable silks and sword blades suggest, more cerulean than the sky itself, alternating with the original dark green on the opposite sides of the waves, which last appeared but muddy in comparison. (Henry David Thoreau, Walden & on the Duty of Civil Disobedience)

The street that they were following suddenly opened upon a wide avenue, and before them spread a broad and beautiful lagoon, the quiet surface of which mirrored the clear cerulean of the sky. (Edgar Rice Burroughs, Tarzan the Untamed)

'sky-colored, sky-blue,' 1660s, with -an + Latin caeruleus 'blue, dark blue, blue-green,' perhaps from a dissimilation of caelulum, diminutive of caelum 'heaven, sky,' which is of uncertain origin. The Latin word was applied by Roman authors to the sky, the Mediterranean, and occasionally to leaves or fields. The older adjective in English was ceruleous (1570s). As a noun, from 1756. The artist's cerulean blue is from 1885. (Online Etymology Dictionary)

Cerulean comes from the Latin word caeruleus, which means 'dark blue' and is most likely from caelum, the Latin word for 'sky.' An artist rendering a sky of blue in oils or watercolors might choose a tube of cerulean blue pigment. Birdwatchers in the eastern U.S. might look skyward and see a cerulean warbler (Dendroica cerulea). 'Cerulean' is not the only color name that's closely associated with the sky. 'Azure' (which ultimately comes from a Persian word for lapis lazuli, a rich blue stone) describes the color of a cloudless sky and can even be a noun meaning 'the unclouded sky.' (Merriam-Webster)