daffadowndilly, daffadowndilly [daf-uh-doun-dil-ee, daf-ee-doun-dil-ee]
noun:
(British informal) 1 daffodil; used at first in the generic sense, still a widespread popular name of the Yellow Daffodil; shrub: probably the Mezereon, which is still so called in Yorkshire 'from the slight similarity of the Greek name Daphne with Daffodil' (Britten and Holland).
2. (British informal, archaic) dandy (c 1830-80)
3. (as daffy-down-dilly) a lawyer who engages in double dealing, that is, representation of both sides in a case, for his own advantage.
Examples:

In my story I began to wonder why Mary and Dickon didn't take Colin to the garden sooner. When Mary and Dickon found the garden they also made friends with some of the animals. They also started gardening and placing flowers such as Daffydowndillys and Crocuses. (Nathan Kimpet, Seven Films That (Mostly) Get IT and Computers Right, The Secret Garden - Mrs. Seabaugh's Period 3 Literature Appreciation, August 2016)

"You are too easily surprised," said Mr Towkington. "Many words have no legal meaning. Others have a legal meaning very unlike their ordinary meaning. For example, the word 'daffy-down-dilly'. It is a criminal libel to call a lawyer a daffy-down-dilly. Ha! Yes, I advise you never to do such a thing. No, I certainly advise you never to do it." (Dorothy L Sayers, Unnatural Death)

'Tis there's the daisy and sweet carnation,
The blooming pink, and the rose so fair;
The daffydowndilly, likewise the jilly-flowers
That scent the sweet fragrant air. (Richard Alfred Millikin, 'The Groves of Blarney') 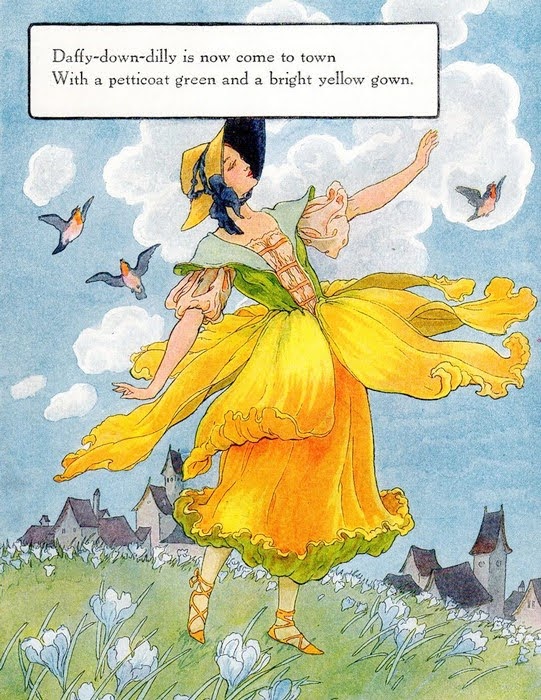 This word has been around since at least the mid-16th century. It is a type of word known as a "sandwich word" in linguistics, because it wraps one word around another. The word daffodilly is split in two, and down has been sandwiched between the resulting parts: daffo-down-dilly. (alphadictionary.com)