Noun:  Salpae are small, squishy oceanic animals that resemble jellyfish, but are actually more closely related to humans. They are chordates and possess a dorsal nerve cord similar to the spinal cord in vertebrates. Their rudimentary body structure is often referred to when creating models of how modern verterbrates might have evolved.

Salpae have a complex life cycle consisting of two main phases.  Courtesy of Wikipedia: "The solitary life history phase, also known as an oozoid, is a single, barrel-shaped animal that reproduces asexually by producing a chain of tens to hundreds of individuals, which are released from the parent at a small size.

The chain of salps is the 'aggregate' portion of the lifecycle. The aggregate individuals are also known as blastozooids; they remain attached together while swimming and feeding, and each individual grows in size. Each blastozooid in the chain reproduces sexually (the blastozooids are sequential hermaphrodites, first maturing as females, and are fertilized by male gametes produced by older chains), with a growing embryo oozoid attached to the body wall of the parent. The growing oozoids are eventually released from the parent blastozooids, and then continue to feed and grow as the solitary asexual phase, thus closing the lifecycle of salps." 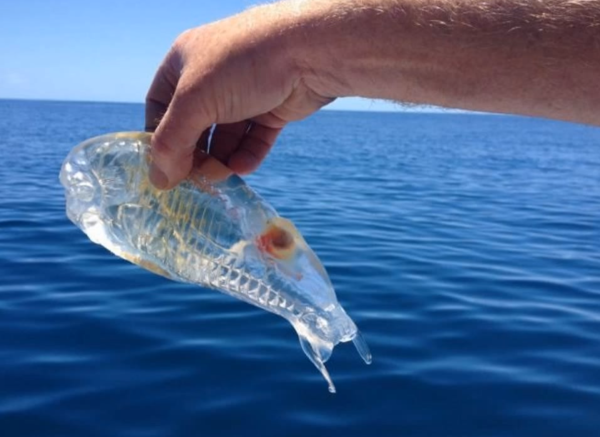 Etymology: New Latin, Greek, French 1510-1520 meaning "fish." Modern use of the word used to describe this particular creature began in the mid 1800s.