The saguaro  (Carnegiea gigantea) is a species of cactus that is only found in the Sonoran dessert of the American Southwest and Mexico.  It can grow to be as tall as fifty to seventy feet and weigh as much as six tons, and live to be 150-200 years old, though scientists suspect that the largest ones could be much older.  It doesn't reach sexual maturity until 35 years of age!

I heard this story about a saguaro in Arizona the other day.  A gentleman had just recently moved from Chicago to Phoenix and purchased his new house because of the ancient saguaro growing in the front yard, but the storms that came through a few days ago knocked it over.  It would cost $40,000 for him to replace the cactus with one that was even half its size and age!

Etymology: 1855-1860.  The word entered the English language by way of the Mexican-Spanish language.  It ultimately originates from a Native American name of unknown meaning and origin, possibly from an extinct Uto-Aztecan language of Sonora. 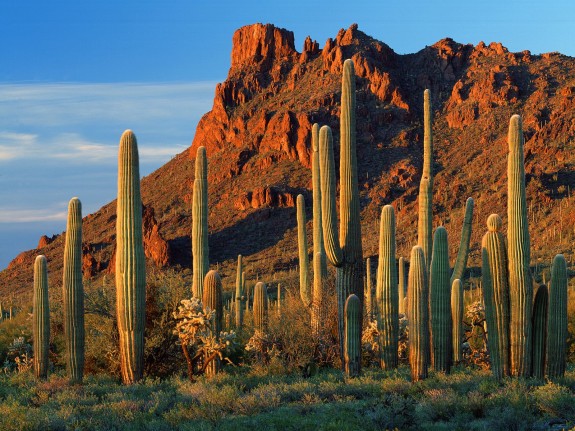