grackle (GRAK-uhl) - n., any of a dozen species of large American songbirds (genus Quiscalus and related genera) where the adult males have iridescent black plumage.


Also used sometimes for a few Indian starlings, such as the hill mynah (Gracula religiosa), but the true grackles are strictly New World beauties. The species that figured the most in the folklore of my childhood was the boat-tailed grackle (Quiscalus major): 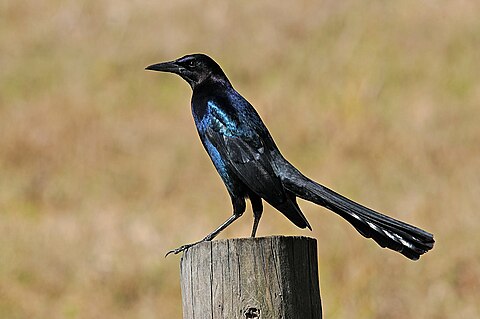 The species seen hereabouts, however, is the great-tailed grackle (Q. mexicanus):

These guys have an astonishing range of calls, especially in early spring (when they get ... frivolous), and in Mexican folklore they were originally mute, until they stole seven songs from either (depending on the teller) seven different birds or a sea turtle. The common name comes from Latin grāculus, jackdaw, which is also a large black bird, but of entirely different sort.