carrack (KAR-uhk) - n., a three- or four-masted European ocean-going vessel of the 14th through 17th centuries. 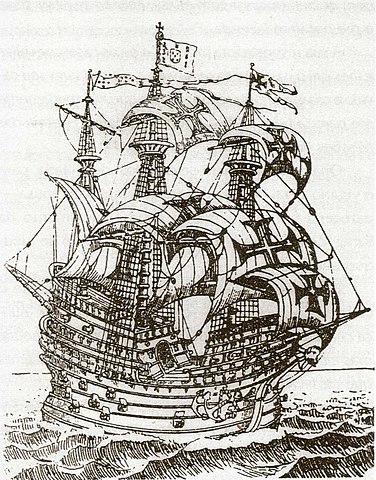 Usually square-rigged on the fore- and mainmast, lateen-rigged on the mizzenmast, with a round stern and high fore- and aftcastles. Also called a nao or nau from the Spanish and Portuguese names, respectively, and sometimes confused with a galleon, which was developed from it. This was the prime vessel of the Portuguese and Spanish explorers and conquistadors -- two of Columbus's ships on his first voyage were carracks, as were all of Magellan's.

Spelled carrake in Middle English, starting in the 14th century, from Anglo-Norma/Old French carrak or carraque, from Old Spanish carraca, probably from Arabic qarāqīr, plural of qurqūr, merchant ship, which might possibly be from either Greek kerkouros, light vessel, Latin carricāre, to load a wagon, or an Akkadian word for a type of river barge. Usage example:

Both Santa Maria and Pinta were carracks, while the Niña was a caraval.