noun (hymenal, adjective)
1. Originally the Greek God of marriage (also Hymenaios or Hymenaeus), mentioned in many Shakespearian plays, and imbued with several origins.

In one: Hymen was a beautiful youth in love with a nobel woman whom he couldn't marry. Instead, he followed her everywhere out of devotion, going so far as to disguise himself as a woman during a "female only" ceremony.

When that group of women, including himself (in drag), and his crush, were kidnapped, Hymen eventually rallied the women to overpower their captors and return to Athens to gain freedom. Hymen struck a bargain to marry one of the captured women as a form of gratitude and thus won the hand of his beloved! Despite their different backgrounds that would've forever separated them otherwise, the marriage became one of famous happiness among citizens Thus, festivals in his honor and the association with marriage. It is said that by calling his name at a ceremony, one "invites" Hymen to attend, in order to secure a prosperous union. 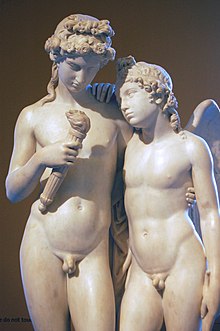 Hymen (left) and Cupid (right) with the flame of love.